Nearly 100 students traveled to Darden's San Francisco Bay Area and Seattle Tech Treks to visit companies ranging from startups to tech giants and experience the culture of living and working in the West Coast's innovation hubs.

The reputations of companies like Google and Facebook precede them. Even unknown early stage tech startups carry with them a certain image and expectations.

In mid-December, though, a record number of University of Virginia Darden School of Business students took part in the School’s annual San Francisco Bay Area Tech Trek to get a firsthand look into the real cultures and opportunities that define the companies powering the world’s premier hub of business innovation.

Organized by Darden’s Career Development Center (CDC), and the Batten Institute for Entrepreneurship and Innovation, nearly 100 students — double the previous record for a Bay Area Tech Trek — took part in visits to 23 companies, another record high, over the course of three days. The students also networked with Bay Area Darden alumni at a reception in downtown San Francisco and joined various industry leaders for topic-focused salon dinners in Palo Alto, covering women in the Bay Area, venture capital and career pathways in tech. Many students then traveled on to Seattle for a second trek to several of the fast-growing companies that call that area home. Netflix representatives discussed some of the company's popular programs during the Darden visit. Intuit previewed the company's popular internship program for Darden students when they visited its corporate headquarters. 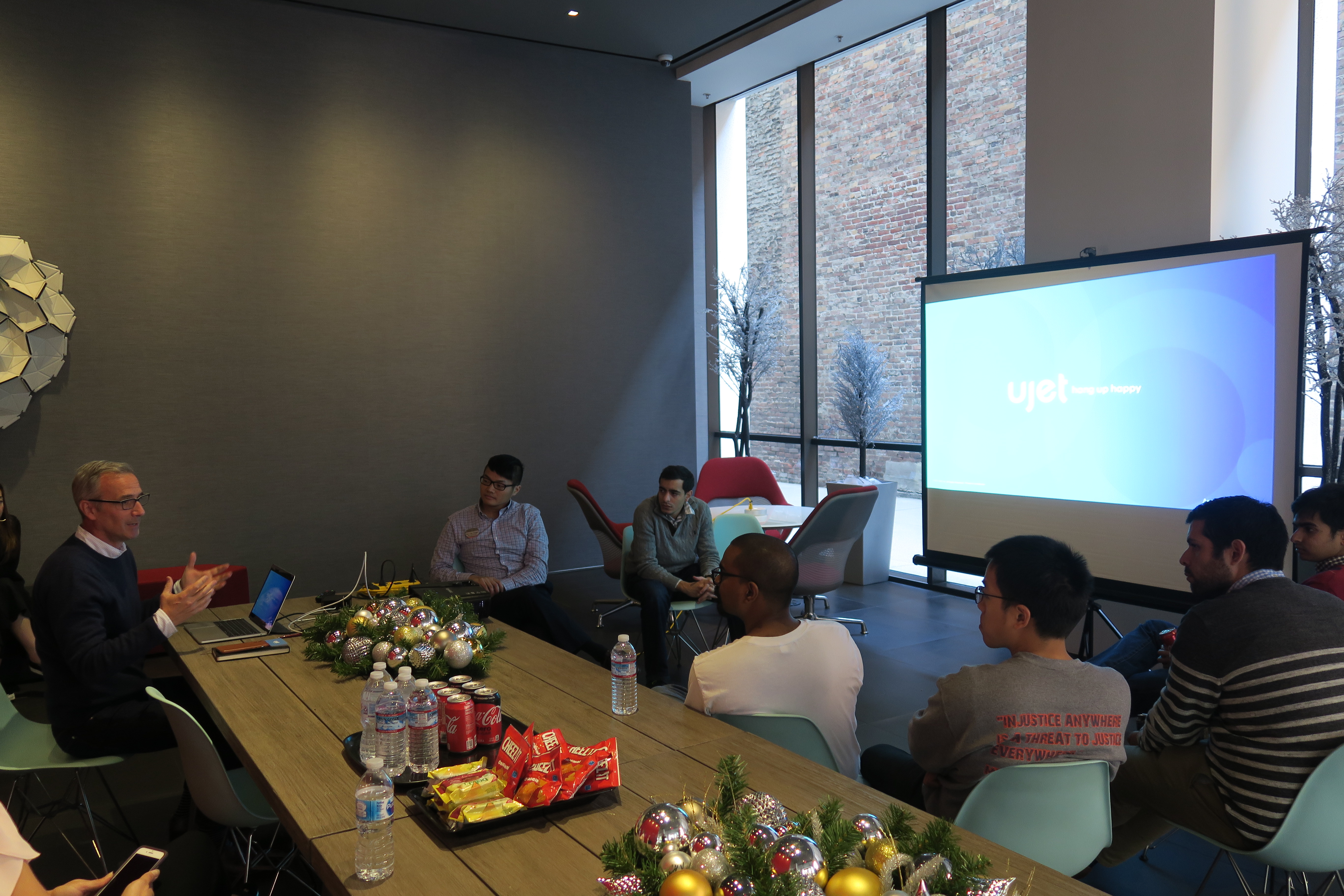 Darden students had the opportunity to workshop a new mobile phone app, Flow With Us, with the founder of early stage startup MSH Labs. Intuit pitched a culture of “8,000 entrepreneurs” dedicated to design thinking and rapid prototyping. Netflix claimed a data-obsessed culture above and beyond its peers. Tesla led with its mission, offering a lean, scrappy workforce in lockstep with the company’s vision to offer consumers a truly sustainable energy lifestyle.

“The visits gave me a great idea of what it would be like to work for those companies,” said Becca Coleman (Class of 2019), who came to Darden from a major film production company in New York City. “It’s not just what they presented in their slides, but how they presented themselves. Some were more casual and informal, and others were more buttoned-up. It gave me insights into their company cultures.”

Jenny Zenner (MBA ’03), who joined the CDC in October in a new position as senior director of technology, entrepreneurship, digital and consumer careers, agreed that experiencing company cultures and the cities they call home provided the greatest value for students.

“They get the chance to ask, ‘Can I see myself living here and working at this company?’” she said.

The growth of the Bay Area and Seattle treks are Darden’s response to the growing interest among students in the largely West Coast-based tech field. About 14 percent of Darden’s Class of 2017 took jobs in the tech sector, most in the San Francisco Bay and Seattle areas.

“When I was at Darden, I created my own job trek during the break arranging individual meetings with alums,” Zenner said. “Now we have the CDC, Batten Institute, and Darden Alumni Association partnering with student clubs to provide this great exposure.”

55 FYs hear from IndieGogo’s Senior Director of Social Innovation (and UVA alum!) about working at a tech startup and launching Generosity, a community for showing and sharing compassion through socially conscious fundraising. #dardentechtrek #whydarden

Darden alumni within the companies visited helped organize and host many of the meetings, often lining up top executives to speak to the students.

Eric Yuan, CEO of the online enterprise video and audio conference leader Zoom Communications, offered advice to students on how to help their companies thrive as future business leaders.

He added that Zoom’s incredible run of growth has stemmed from its focus on customer experience and company culture. “If we do not deliver happiness and trust, customers will leave us.”

Levi Strauss & Co. Executive Vice President and CFO Harmit Singh discussed his leadership ethos and the company’s new smart jacket, Levi’s Commuter Trucker Jacket with Jacquard by Google, which he wore at the presentation. “Levi’s is a 150-year-old startup,” he said, describing the mentality that has allowed for the company’s successful turnaround story. Singh’s advice to students was to take risks and play outside of their comfort zone. He referenced his own diversity of experiences as essential to success in his current role.

UJET Chief Business Officer Jim Schinella (MBA ’93) emphasized the power of leveraging personal networks while sharing the story of how he joined the cloud-based customer service solutions startup backed by investors including Kleiner Perkins Caufield & Byers and DCM. He said his early experience at companies like Hewlett-Packard and Netscape helped him grow close relationships that have lasted for years, highlighted when a friend met UJET founder Anand Janefalkar on a commercial airline flight and felt compelled to connect him with Schinella.

Schinella, also a veteran of Yahoo and several startups in Silicon Valley, shared his philosophy for choosing each step in his career path. He said he looks for good people, a fast-pace and high-growth environment, and the opportunity to learn something new.

“I always put myself in businesses where I’m learning. I love to learn. I also love to be the person who brings a different perspective,” he said.

Hotel Tonight co-founder and CEO Sam Shank, a UVA graduate, spoke about the three words that serve as the foundation for his company: “build, question, respect” — three elements that are factored into every aspect of the company. When asked about how he views MBAs in the current job market, Shank said he “views the MBA as somebody who takes two years to invest in themselves. That is meaningful.”

Thank you to @DardenMBA for starting their weekend off with @TwitterU! pic.twitter.com/i2VD4R4k8C

How to Leverage the Darden MBA in Silicon Valley

A common refrain at virtually every stop along the Bay Area Tech Trek: The competition for jobs at the most desirable companies in the area is intense. Attending a top-tier school like Darden doesn’t guarantee a summer internship, nor does a prestigious MBA assure a full-time position.

But a Darden MBA is a valuable foot in the door.

Five Darden students in the Class of 2018 were summer interns at Walmart eCommerce last summer, and a panel of product managers at the online retail giant that included Charlie Strickland (MBA ’17) and Gal Avrahamy (MBA ’15) described how product and business manager positions were an ideal entry for Darden MBAs because of the general management skills required to succeed.

Hosts from companies around the Bay echoed the sentiment that product manager, marketing and data analytics positions were the best opportunities for MBAs to jump into the area’s red-hot tech sector.

Each company painted a slightly different picture about how open they are to MBAs making the jump directly into their offices. Companies like Walmart eCommerce and Intuit have well-established MBA intern programs yielding future full-time employees. Fast-growing tech giants like Facebook and Google are increasingly growing similar internship pipelines. However, some like Tesla and Netflix said MBAs typically needed some experience in other fields like management consulting before finding a fit there.

“Our goal in expanding the Bay Area Tech Trek to companies who do not officially recruit MBAs, as well as those outside of the traditional tech sector, is twofold,” said Robyn Swift, director of West Coast Initiatives for Darden’s Batten Institute. “We aim to give students exposure to this region and these industries early, to better inform their decisions around internships and career paths post-Darden. We are simultaneously introducing Darden to companies who are unfamiliar with our high level of talent, knowing that if they make a bet on a Darden student or graduate, they will win.”

Teddy Fay (Class of 2019) left the Bay Area trek impressed with the opportunities Batten and the CDC helped create.

Insightful panel discussion with Googlers learning about applying the #DardenMBA to work at #Google plus a tour of the SF office. Check out the office view! #dardentechtrek #whydarden