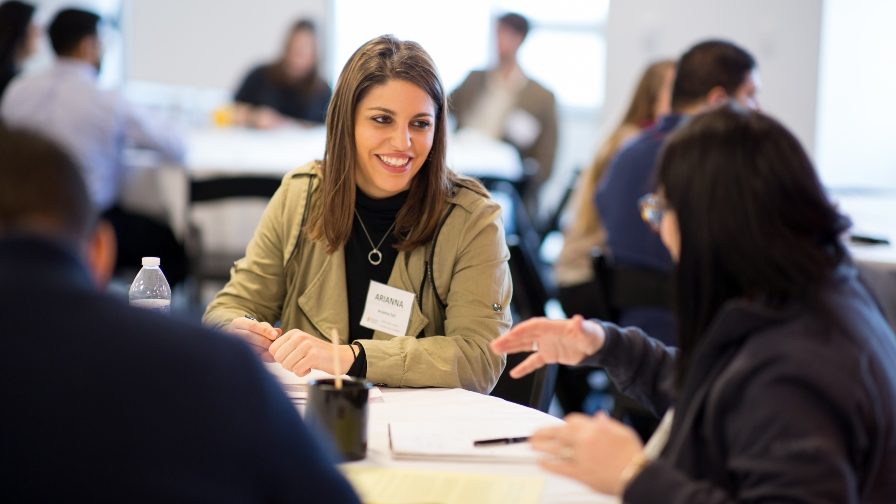 Pictured at UVA Darden DC Metro during her time as a UVA MS in business analytics student, Arianna Zell (MSBA '20) leveraged her UVA experience to earn a job at Capital One during her time in the program.

In October 2018, double Hoo Katie Feige (MSBA ’19) began a new phase of her career when she joined Capital One’s human resources team just three months into her 12-month journey with the UVA Master of Science in business analytics (MSBA) program. Before graduation, her classmate Roberto Andrade (MSBA ’19) would join her, making a career switch from Marriott to become Capital One’s director of people analytics. For such a young program — the MSBA, a 12-month hybrid in-person and online delivery program jointly delivered by UVA’s Darden School of Business and McIntire School of Commerce, is in its third year — it’s turned into a strong and steady connection. The MSBA and Capital One alumni think it’s no coincidence.

“Thinking about the DNA of the MSBA, there is data on one side and business on the other. The program brings them together, teaching how to move strategy forward with advanced algorithms and data,” said Andrade. “Capital One has a similar DNA.”

The proximity of the MSBA program — hosted at UVA Darden DC Metro in the Rosslyn district of Arlington, Virginia — to the McLean, Virginia-headquartered bank perhaps most famous for the “What’s in your wallet?” catch phrase repeated by the likes of Samuel L. Jackson and Jennifer Garner has helped, too. And with an annual place on the list of top hiring companies of Darden MBA students, Capital One recruiters have a long history working with the Darden Career Center.

Inside a Growing, Dynamic Network

Beyond job skill, proximity and recruiting support, the early connection established between the program and Capital One has come down to one key thing: relationship-building through a dynamic network. “[Feige] connected me to the opportunity at Capital One and helped me go through the process. Someone else from my cohort joined later,” Andrade said. “[Braynard] reached out to me to ask how to bring the things she wants to do in her career together. I’ve already started having conversations with people who want to be part of the MSBA program next year.”

Braynard said she has also been considering Darden’s Executive MBA program, but her discussion with Andrade raised her awareness about the MSBA and started her down a path to understand it was the right decision for her.

Zell was a digital marketing specialist at another company when she began her MSBA journey, and as a member of the Class of 2020 Student Activities Committee, met outgoing committee member Andrade early on during a transition meeting.

“I learned that he went to Capital One during the program. I had a great conversation with him about planning for the year ahead with the 2020 class,” said Zell, who later organized a social event between the MSBA classes of 2020 and 2019. There, she met up with Feige and Andrade, and was intrigued by how highly they spoke of their employer.

“They were so excited about their work,” she said. “I’d never met anyone with that much passion at a large company.”

When she made the leap to Capital One before graduating from the MSBA, Zell learned Andrade and Feige were bellwethers for the company culture.

“In the MSBA, we were all so fascinated in learning more. The whole program focuses on how to solve complex problems,” Zell said. “The No. 1 thing that resonated with me at Capital One is that everyone is also hungry to learn. It’s very much the same.”

Putting the MSBA Advantage to Work at Capital One

Andrade, Zell and Braynard all emphasize the value of connecting data to business strategy.

“This degree gives me the ability to think about how to solve business challenges not only from a technical data-driven perspective, but also how to communicate data to nontechnical audiences to drive and influence decision-making,” Braynard said. “That is the biggest value the program offers — the balance between hard tech skills and softer skills.”

They also extoll how team learning with a diverse set of classmates has expanded their view and helped them understand the value of differing perspective and experiences. Terms like analytical thinking and problem-solving skills top the list when they describe the most important things they’ve learned.

These aren’t just buzzy talking points; they’re lessons Darden and McIntire professors emphasize in every one of the program’s five modules, each culminating in a rigorous team project.

“The biggest advantage I gained is that I can swivel chairs between data and business strategy quite naturally,” Andrade said. “I can understand the algorithms so that I can talk to data scientists on my team and ask them the right questions.” Zell summed up the advantages of the MSBA in the workplace succinctly: first, learning to speak a new technical language; second, the power of the network; third, the support of the entire MSBA community, including professors and program staff; and fourth, enhanced business acumen across functions.

Andrade noted that his function, people analytics, is one that has exploded at major corporations in recent years, and differs from traditional HR through its use of data as a fundamental aspect of talent acquisition and development.

“It’s evolved quite fast,” Andrade said. “Many companies are developing people analytics as a function and moving into new areas like algorithms and predictive analytics. The firms with people analytics functions are focusing on better employee experiences.”

In other words, it’s a growing field tailor made for those with the skills developed in programs like the MSBA.

Balancing the work load of the MSBA program while continuing to work full time and balance life at home is certainly no easy feat. Andrade, Zell and Braynard all attest to that fact.

However, Zell said she found the support she got from classmates when she transitioned to Capital One was invaluable, giving her a community of peers and professors to whom she could ask questions in order to get up to speed at her new job more quickly.

Andrade frame the decision to enroll in the MSBA in terms of the opportunity cost.

“People asked me why I was going back to school, why didn’t I do something else. I could buy a motorcycle or go to school.”

So does he regret not getting that motorcycle?

“Three years after deciding to join the program, it’s one of the best decisions I’ve ever made,” Andrade said. “I’m so happy I don’t have a motorcycle because the experience was so transformational.”

msba-news
About the University of Virginia Darden School of Business