A new scholarship program aimed at attracting the most talented first-generation students to the University of Virginia will be established as part of a $100 million gift announced by the Jefferson Scholars Foundation.

The gift comes from David and Jane Walentas. David Walentas is a visionary New York real estate developer, one of the nation’s most successful self-made entrepreneurs and a 1961 alumnus of UVA and 1964 graduate of its Darden School of Business. He was the first in his family to attend college. The bulk of the gift — $75 million — is committed to scholarships and fellowships for first-generation students, with the remaining $25 million dedicated to fellowships and professorships through the Jefferson Scholars Foundation and Darden School.

“This gift will have a profound and lasting impact on first-generation college students,” said Jimmy Wright, president of the Jefferson Scholars Foundation, which directs the premier undergraduate scholarship and graduate fellowship programs at the University of Virginia. “We look forward to establishing the preeminent scholarship program in the nation for first-generation students and bringing an exceptional group of smart, resilient and industrious Walentas Scholars to the University of Virginia.”

The Walentas Scholars will be funded with $50 million from Walentas, plus an additional $20 million in matching funds from the University’s Bicentennial Scholars Fund. It initially will seek to identify and attract first-generation undergraduate students from the Commonwealth of Virginia; from Rochester, New York, where Walentas grew up; and from New York City, where he built his real estate business. Schools in these areas will be invited to nominate candidates to compete for the scholarship each year, beginning in 2022. 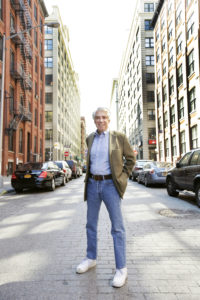 “I cannot imagine a better way to honor the future than by making a significant and lasting commitment to first-generation college students,” UVA President Jim Ryan said. “This gift from David Walentas will serve as a cornerstone of the $5 billion campaign we are launching this weekend and will have an enduring impact on the University of Virginia and on those who attend it.”

The Jefferson Scholars Foundation expects to enroll as Walentas Scholars 60 undergraduate students who have achieved academic excellence, possess strong leadership potential and have demonstrated the type of resilience and tenacity that made Walentas so successful. The merit-based scholarships will cover the full cost of attending the University.

“Growing up, I didn’t know anyone who had been to college, but I knew that it was a way out of poverty and a path to opportunity,” Walentas said. “Thanks to a scholarship, I was the first in my family to attend college, and my time at UVA completely changed my life. There are so many talented young people in this country — in places like New York City and Rochester, where I grew up — who can help make our society a better place if given the opportunity. I can’t wait to see how these first-generation college students change the world.”

The Jefferson Scholars Foundation, in Coordination With Darden, Will Establish Graduate Fellowships for First-Generation Students

First-generation college graduates interested in pursuing a full-time MBA from the University’s internationally ranked business school also will benefit from the Walentas’ gift; they allotted $25 million to create a new fellowship program for first-generation MBA students through the Darden School of Business’ Future Year Scholars program.

Scott C. Beardsley, dean of the Darden School, welcomed the gift. “At the Darden School of Business, we are incredibly grateful to, and proud of, alumnus David Walentas and his wife Jane for creating this new program to enable exceptional first-generation students to attend Darden as Walentas Fellows and pursue their purpose,” he said.

“Their additional generosity in creating a new Walentas Professorship in Real Estate will enrich our curriculum and help inspire future generations of Darden students and faculty.”

The Darden School and Jefferson Scholars Foundation will identify students who are the first in their immediate families to graduate from a four-year college or university. Like Walentas, these fellows will possess outstanding academic records, the potential to provide innovative leadership in the corporate and nonprofit sectors, and a desire to make the world better.

UVA kicked off the public phase of its $5 billion Honor the Future capital campaign this weekend, 200 years after the University was chartered. The Walentas gift is concentrated around the campaign’s top priorities: student access and faculty excellence.