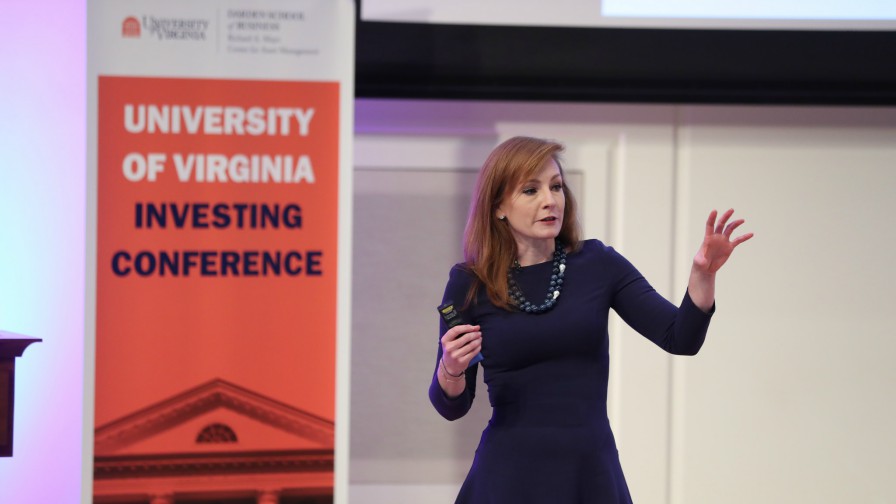 BlackRock Managing Director and Chief Equity Strategist Kate Moore, a UVA alumna, said she has been surprised by the strength of recent corporate earnings.

UVIC 2017: Flight to Passive Investing and the Rise of Technology

What a difference a year makes in the investing landscape. When the University of Virginia Darden School of Business hosted the annual University of Virginia Investing Conference (UVIC) in November 2016, the world was just days removed from the surprise election of Donald Trump as president of the United States, and an enormous sense of the unknown suffused the annual gathering of industry executives, analysts, portfolio managers and academics.

At the the 10th edition of the annual conference on 9-10 November, the generalized anxiety about the state of the economy among presenters appeared to have lessened, with the mood no doubt buoyed by a string of positive economic signs and major stock indices that are up 20 percent or more over the past year. But if certain macro unknowns were less prevalent this year, the trends sweeping the investing industry were on full display, with multiple speakers grappling with the flight to passively managed funds and the rise of technology-assisted trading, in particular.

Darden Professor and Richard A. Mayo Center for Asset Management Academic Director Pedro Matos set the stage for much of the conversation that followed when he opened the conference with a presentation on the growth of passive investing worldwide. Matos’ research showed passive management growing to what is now about a third of the assets under management in the United States, and while the official tally is substantially lower in non-U.S. funds, Matos highlighted the rise of the so-called “closet indexers,” in which actively managed funds keep a substantial amount of assets under management in holdings that directly mirror index funds. Factoring in the closet indexers, Matos suggests passively managed funds could be calculated as roughly 42 percent of domestic funds and 43 percent of funds based outside of the U.S.

The rise has broad implications within the industry and beyond. In addition to downward pressure on active management fees, the rise of passive management — both closeted and explicit — appears to have spurred outperformance among what Matos refers to as “truly active” mutual funds, as active managers become even more active as a result of competitive pressures.

Matos’ introduction set the table for Hidden Brook Investments Managing Partners Ted Seides, who, in addition to hosting a popular financial podcast, is perhaps best known for making a public wager with Warren Buffett over the 10-year performance of five actively managed hedge funds versus the S&P 500 Index.

Seides said he took the charitable bet largely because of his confidence that he would win, and said the “most interesting and deepest” lesson he took away was about public relations, as Buffett expertly messaged his case for the benefits of low-cost index funds.

“Now I realize that, no matter what happened, it was a losing bet,” Seides said, adding that while he would not make the bet today, he would still include hedge funds in a diversified portfolio despite what he saw as some of the luster coming off the industry.

Seides suggested the amount of competition for ideas was immense, and attempting to exploit market inefficiencies now is harder than ever.

“Hedge funds have always been about what’s a little bit different,” Seides said. “There are areas, it’s just a lot harder than it was.”

Seides said students interested in the field should ensure they were motivated by a desire to do the work, as opposed to making large sums of money.

“If you are doing it because you like investing and want to be guy who makes a billion dollars, it’s not going to work.” Seides said. “The fortunes that people have made in hedge funds in the past will not be made in the future”

BlackRock Managing Director and Chief Equity Strategist Kate Moore offered a big picture take on the investing environment, which she said offers both positive signals and warning signs. Moore, a UVA alumna, described her role as “quasi-academic but still on the buy side,” with projections based on fundamentals, valuations and BlackRock’s in-house reams of deciphered data.

“Our proprietary macro tells us that growth is a lot better than consensus for 2018,” Moore said, adding that as a natural contrarian, she was wary of the fact that “everyone” now seemed to be forecasting sustained global expansion.

Among the signs pointing to an increased bullish run, Moore noted the strength and breadth of corporate earnings and a significant amount of growth outside of the U.S.

And while many equity markets are at an all-time high, Moore said she is historically less reliant on valuation than many of her peers when considering investments, calling the metric “not always a great guide to future returns.”

In the equity markets, BlackRock is currently overweight on Europe, Japan and emerging markets, and neutral on U.S. stocks, with the latter described as a “call to action” partially due to BlackRock’s contention that the “home country bias is pronounced.”

Moore, like other UVIC speakers, detailed the degree to which technology was a critical and fast-moving component of her job.

“When I joined BlackRock, I did not understand how much of a tech company we are,” Moore said. “I underappreciated how much time and personnel is devoted to financial technology.”

Moore said she did not expect robots to replace portfolio managers any time soon, but said the company was automating where it could and using humans to identify opportunities. Moore further suggested cutting-edge analytics and quantitative tools would be increasingly essential to success in the investment management space.

“If you don’t have these components and you are trying to manage money like you used to, the chances that you are going to be a winner are low,” Moore said.

Moore said she was in the process of learning the programming language Python, and said many of her senior colleagues were doing the same.

Attendees also heard from financial technology firms working in previously untapped spaces, with Predata CEO James Shinn explaining how his firm tracks social media and transforms sentiment into risk indices and asset price predictions, allowing users to pick up on trends before they make their way into the “curated media.”

GreenOak Real Estate founder Sonny Kalsi offered a snapshot of the real estate market, which he said had been weaker than many believed in the U.S. in recent years. Despite the underlying economic recovery, Kalsi said real estate prices were generally down 15 to 20 percent over the last two years and national sales volume was down 23 percent year to date in the U.S.

Moreover, Kalsi said supply — which he called the biggest enemy of real estate markets — appeared to have largely caught up with demand.

With a domestic real estate market that appears to have peaked in 2015, Kalsi nevertheless said subsequent price drops have made areas of the U.S. compelling investments again, with GreenOak almost entirely focused on New York, Boston, San Francisco and Los Angeles, four “fortress-like” cities with constant demand and limited supply.

Recounting the lessons of over-diversification in investment during his time at Morgan Stanley — Kalsi said the investment giant’s real estate business was in 33 counties at the time of the 2007 crash— GreenOak now operates in only six countries.

“I think keeping it really simple is important,” Kalsi said. “That means there have to be times in the cycle when you are comfortable sitting it out.”