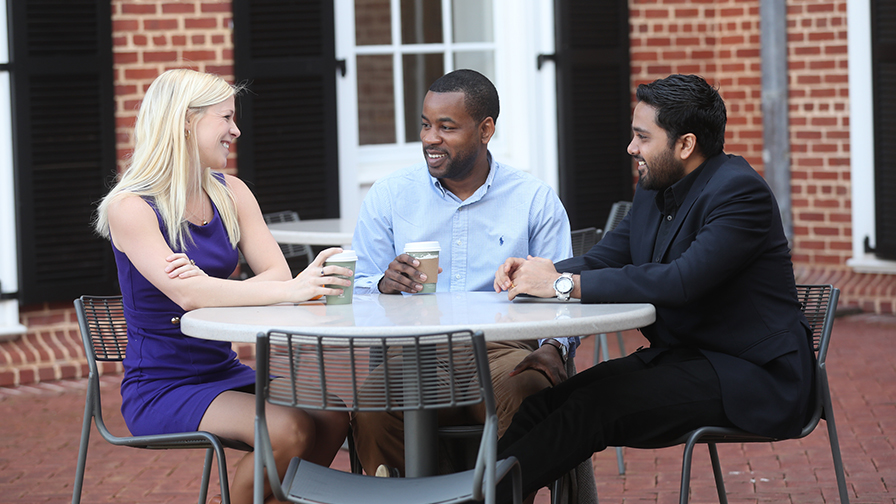 Strong initial donor support for Dean Scott Beardsley's Darden Scholarship Challenge has led to an increase in key metrics like average test scores and overall diversity for the Class of 2018.

A native of India with multiple engineering degrees, including a master’s degree from the University of Florida, Chari spent the previous five years in industrial procurement and supply chain management positions, eventually managing a $200 million portfolio of raw materials at a Philadelphia-area manufacturer. With an eye toward “growing in business and becoming a business leader,” Chari decided to explore an MBA program, specifically one with a focus on leadership development.

As the offers rolled in, Chari was faced with a decision that would set his professional course for the future. The choice to definitively attend Darden was tipped by an increasingly important factor for high-achieving candidates: a generous scholarship offer.

“When I got the letter from Darden saying, ‘You’ve been selected for a scholarship,’ it helped tip the scales in two ways. It helped me make a decision between two schools, but it also helped answer the question: Do I really need to go to school or can I continue doing the work I am doing now and grow into that leader in the next five years?” Chari said. “So, from a perspective of opportunity cost, the scholarship definitely helped.”

After the goal was set in 2015, Darden alumni and friends have responded immediately to what will be a years-long effort, and the Darden community is already seeing concrete evidence of scholarship dollars at work — measured largely in the notably high caliber of the Class of 2018.

The Class of 2018 set a number of new high watermarks, with a record number of women at 39 percent, more minority students than ever before and the highest-ever average GMAT score of 712.

Perhaps most tellingly, the yield — the percentage of students who chose to enroll at Darden after being offered admission — rose from 46 percent for the previous class to 52 percent.

Assistant Dean of Admissions Sara Neher says a number of factors have converged to make scholarships such an important part of an admissions offer, including the industry-wide rise in tuition, an increasing number of students coming from less lucrative professional backgrounds and the rising undergraduate debt many students carry into their MBA career.

“The decision to come to business school is more influenced by finances than it ever has been before,” said Neher.

Darden’s assistant dean of admissions notes that while students aren’t necessarily choosing Darden solely on scholarships, their availability levels the playing field when it comes time for students to make a decision.

“We are really identifying people who are great fits for Darden — who we want to come here. Prior to last year, these students just couldn’t afford to attend Darden. They would receive a big offer from another school that they liked less, but they would tell us that ‘I can’t turn down this ability to pay,’” said Neher.

Scholarship dollars also play a critical role in attracting international students, particularly in an era of a strong U.S. dollar.

“If you are nervous about being able to get a job in the U.S., but you have a scholarship, you could go back and work in your home country,” Neher said. “If you don’t, it can be very hard to go home and pay off your loan.”

Neher said the increased funding also helped round out the industry diversity of the Class of 2018, with more students in fields such as consumer products, marketing, operations and supply chain management. Faculty members have applauded the diversity of backgrounds that is visible in the classroom, Neher said.

Professor Kim Whitler said she’s seen a change in makeup in the First Year Marketing class she teaches, a diversity she attributes in part to the increase in scholarship funding.

Whitler, who says diversity of experience and competencies have always been the great strength of the Darden classroom, points out the range of backgrounds was even more pronounced in her most recent First Year class. Notably, Whitler said it was the first time the class had more than one or two students with marketing backgrounds.

“It’s surprising because marketing is one of the biggest areas that is hired from undergrad,” Whitler said. “Conceptually, you have all of these would-be business school students hired into marketing and sales, you would think that a similar proportion would enroll in an MBA program; yet, for some reason at Darden, they haven’t been.”

Whitler believes concerted efforts to attract top female and minority candidates might have led to the increased function diversity. But no matter the reason, the professor said it made for a “spectacular start” to the 2016–17 school year.

“Part of the richness of the case methodology experience in our classroom is the diversity of knowledge, skill, competency, thinking and experience,” Whitler said. “As we become more focused on greater demographic diversity, an outcome of this is greater diversity in types of backgrounds and experiences coming into the program — and that’s terrific.”

Chari, who coincidentally said he has “fallen in love with marketing” in the early days of his Darden experience, anecdotally confirms the strength of his classmates in the Class of 2018.

“My peers are so talented and knowledgeable,” Chari said. “It’s been incredible to see how many smart people can be piled into a room and how they can teach you so many things in the six hours you spend together in class each day.”

Chari isn’t certain what career path he’ll eventually pursue, but he’s determined to ultimately lead a global organization. The engineer thinks increased scholarship support at Darden will also help other students interested in leadership get off the fence and into the MBA program.

East Asia
About the University of Virginia Darden School of Business