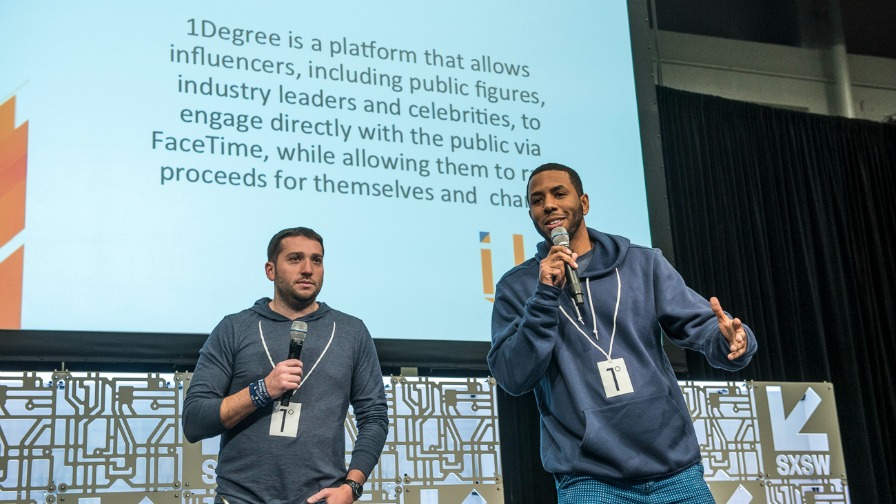 Second Year students and 1Degree founders Sam Boochever and Max Huc provide an inside look at the festival for entrepreneurs in this recap of Darden's first foray into the SXSW conference.

For the first time this March, the University of Virginia Darden School of Business carved out an official presence at the massive South by Southwest (SXSW) in Austin, Texas, with the W.L. Lyons Brown III i.Lab at UVA exhibiting three i.Lab Incubator program startups at the conference.

The i.Lab, operated by Darden’s Batten Institute for Entrepreneurship and Innovation, brought the founders of Contraline, Critical Flow and 1Degree to the conference to pitch their ventures and network at one of the world’s largest innovation events.

Throughout the week, the exhibit helped facilitate connections with companies, angel and venture investors, and many UVA alumni who are helping make crucial connections for the startups.

But Darden’s impact at the conference wasn’t limited to showcasing some of the i.Lab’s most promising incubator successes. Darden alumni served as leading lights at SXSW panels and events throughout the week. Conference attendees check out the i.Lab at UVA exhibit at SXSW 2017. The founders of Contraline, Critical Flow and 1Degree share the stage at the SXSW pitch event.

SXSW is known for its hectic pace and eclectic mix of entrepreneurs mixing in the Austin melting pot. To provide a true inside look at the conference, 1Degree founders Sam Boochever (Class of 2017) and Max Huc (Class of 2017) wrote about their impressions of the experience in Texas and the work that went into making it a success.

MH: It was the second day of SXSW and my body hurt. I had lost 12 pounds over the previous 48 hours fighting food poisoning, but none of the hundreds of people that had stopped by our booth over the past two days had any idea. Even though I felt absolutely terrible, I wasn’t going to waste this opportunity to showcase 1Degree. My body had been pushed to the limit, but as I stood outside Rio, a club in downtown Austin, I was juiced to finally partake in SXSW’s evening networking events. For starters, I could finally keep food down. More importantly, I had VIP tickets to an event co-hosted by Reddit and Twitch. I didn’t know what to expect, but I figured there would be some major industry players in the room.

After some mingling, the DJ gathered the crowd, about 200 people, near the front of the club to introduce UVA alumnus Alexis Ohanian, the co-founder and chairman of Reddit. Sam, who has spent about 10,000 hours of his life on Reddit, looked like a teenager about to meet his childhood hero. After Alexis’ entrance, the DJ told the slightly star-struck crowd, “The motto of Austin is ‘Keep Austin Weird’ and, in that spirit, I want you to introduce yourself to someone on your right and someone on your left that you don’t already know.” While everyone was awkwardly introducing themselves to their neighbors in the crowd, without hesitation, I made my way to the front of the room and introduced myself to Alexis. To avoid coming off too strong, I decided to wait until later in the evening to pitch him 1Degree. Unfortunately, I never got that opportunity as he slid out the back door five minutes later.

SB: Earl, our chief technology officer, had been working around the clock for the previous eight weeks building version 2.0 of the 1Degree app, which we planned to debut at SXSW. After launching our MVP the previous summer, we spent five months interviewing hundreds of our early adopters. We incorporated their feedback into version 2.0, which improves the user experience, the user interface and the technical foundation in preparation for scalability. To ensure the app would be ready in time for the festival, Max and I spent alternating weeks flying back and forth to Los Angeles to work with Earl. Three days before SXSW, we submitted version 2.0 to the app store with our fingers crossed that Apple would approve the new version in time.

Early Saturday afternoon, the day before the start of the festival, Max and I met up with Earl, who had flown in from California to join the SXSW festivities. Even though Austin was already buzzing with energy, the three of us spent the remainder of the day hunkered down in our hotel room preparing — updating our website, finalizing our promo videos, fine-tuning our presentation deck for the upcoming PitchTexas competition.

On Sunday morning, as I walked through the convention floor on the way to our booth, I couldn’t help but marvel at the sheer size and scope of this event — hardware, software, apps, virtual reality, augmented reality, drones, etc. Companies of all sizes, from startups to large conglomerates like NASA and Facebook, were there displaying their newest technology. A number of countries even sent delegations. When I finally found our booth, one thing was immediately clear: We needed a bigger monitor if we were going to stand out among the crowd. So I called a Fasten (Austin’s version of Uber) and hightailed it over to the nearest Best Buy to purchase a large display screen. When I got back, Max and Earl, to no surprise, were already pitching large groups of people, so I quickly set up the new monitor and jumped in the mix. For the next eight hours, the spotlight was ours. Anyone who made eye contact as they walked by our booth heard the 1Degree pitch. My voice was almost completely gone by the end of Day One, but the tone was set for the rest of SXSW. No one was going to out hustle the 1Degree team.

MH: At our booth in the convention center, we pitched 1Degree to well over 1,000 people and collected over 300 business cards. Not only did we pitch countless potential end users, but we also established dozens of strong business leads. We had conversations with the SVP of media development for the PGA Tour, the VP of brand strategy for the Indiana Pacers, the SVP of media at Univision, the PR team for businessman Robert Herjavic, and an account executive at Warner Bros., to name a few. Currently, we are discussing deals with a number of the leads we cultivated at the festival.

The madness didn’t stop when the convention center closed each day. At SXSW, brands rent out houses, bars, clubs and office spaces throughout the city to host private events. In advance of the festival, Sam had secured tickets to a number of invite-only gatherings and the 1Degree team hit event after event, sometimes as many as six in one evening.  Everywhere we went, we wore our 1Degree shirts. Seriously, we wore our shirts everywhere, which caused some confusion as we frequently got mistaken for a boy band (me being the lead singer, of course). As hungry entrepreneurs, we took full advantage of every interaction.

SB: Even in the midst of one of the country’s biggest technology festivals, not all of the week’s excitement came as a result of SXSW. When the Foundry Group, a top VC firm, called me back in response to our invitation to participate in our upcoming American Civil Liberties Union (ACLU) event, I started pitching them over the phone as I was racing through the convention center floor in search of a quiet place to talk.  Despite pitching them while maneuvering through the crowds in the convention center, the Foundry Group eagerly agreed to take part in the event. During the Collision technology conference in May, 1Degree will host a virtual Shark Tank-style pitch event, where aspiring entrepreneurs will have the opportunity to pitch a number of premier investors, founders and technologists through the 1Degree app — all to benefit the ACLU. We created this event because, from our experience, we know how hard it is to get face time with these “sharks.” For example, I wanted to connect with Mark Cuban when I saw him at SXSW, but I couldn’t get within 10 feet of him. With the addition of the Foundry Group, our lineup for the ACLU event was almost complete.

MH: On our last evening of the festival, while Sam and Earl were back at the hotel preparing for the PitchTexas competition and working on the 2.01 version of the app, respectively, I hit 6th Street to do some more networking. My plan was to return to the Reddit house, which was hosting another event, with the hope that Alexis would make an appearance so I could pitch him to join our lineup for the ACLU event. I was on my second Shirley Temple unsure if he would show when someone spotted him across the room. It was game time. As soon as I approached, he remembered meeting me from two nights prior. To my surprise, not only was he amenable to participating in the event, but also, coincidentally, he was scheduled to be one of the keynote speakers at the Collision conference where we plan to host the virtual event.

Thanks to the Batten Institute and the i.Lab, we had the opportunity to be a part of SXSW, which allowed us to make this connection with Alexis, as well as other influencers and brands. However, most people do not have the opportunity attend events like SXSW as a means to make meaningful connections with individuals who can impact their lives, which is exactly why we created 1Degree — to break down the barriers that prevent people from connecting face-to-face with individuals that they otherwise wouldn’t have the opportunity to connect with.

conference, North America
About the University of Virginia Darden School of Business